Mister No is an Italian comic book, first published in Italy in 1975 by Sergio Bonelli Editore. Mister No was created by writer Sergio Bonelli artist Gallieno Ferri in Spring 1975. Bonelli published under the pseudonym Guido Nolitta. The regular monthly series endured for 379 publications, and the last issue was published in December 2006. Three special issues were made from 2006 to 2009.

The first story is set in 1952, a few years after the end of the Second World War, and the last was set in 1969. Issue 295 featured a story set in Manaus during year 2000. The special issue number 8 featured a story with Martin Mystère.

Mister No’s real name is Jerome Drake Junior, his father being Jerome Senior, and he was born c. 1922.[1] He is a former soldier who served in the United States Army. After the Second World War he moved to Manaus, in the middle of the Brazilian Amazon Forest to escape from the horrors of the war. Half hero, half anti-hero, he fights for his own peace and tranquility which he hopes to gain in those wild territories.

He works as an aeroplane pilot and tour guide, flying his Piper. His best friend is the German Otto Kruger, whom he first met in São Luís. Otto was nicknamed Esse-Esse (S-S) by Brazilians because of his past as an officer in the Nazi German Army. Mister No, like Esse-Esse, is a lazy man who likes hanging around in Paulo Adolfo’s cantina, drinking cachaça and flirting with girls, and he often gets involved in dangerous activities and trouble against his will.

Although many of Mister No’s adventures take place in Brazil, some are set in other Latin American countries, North America, Europe, Africa and Asia.

Mister No is very popular in Italy, France,[2] Turkey, Greece and the countries of the former Yugoslavia (especially Croatia, Serbia, Bosnia and Herzegovina, Montenegro, and North Macedonia) where the comic book is currently being published and distributed by Serbian edition Veseli Četvrtak, Croatian Strip-Agent and Libellus. 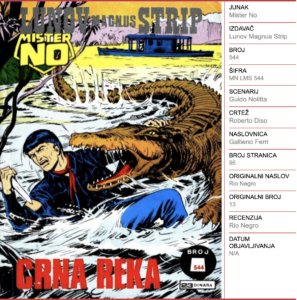 There are no reviews yet.

We use cookies on our website to give you the most relevant experience by remembering your preferences and repeat visits. By clicking “Accept”, you consent to the use of ALL the cookies.
Do not sell my personal information.
Cookie SettingsAccept
Manage consent

This website uses cookies to improve your experience while you navigate through the website. Out of these, the cookies that are categorized as necessary are stored on your browser as they are essential for the working of basic functionalities of the website. We also use third-party cookies that help us analyze and understand how you use this website. These cookies will be stored in your browser only with your consent. You also have the option to opt-out of these cookies. But opting out of some of these cookies may affect your browsing experience.
Necessary Always Enabled
Necessary cookies are absolutely essential for the website to function properly. These cookies ensure basic functionalities and security features of the website, anonymously.
Functional
Functional cookies help to perform certain functionalities like sharing the content of the website on social media platforms, collect feedbacks, and other third-party features.
Performance
Performance cookies are used to understand and analyze the key performance indexes of the website which helps in delivering a better user experience for the visitors.
Analytics
Analytical cookies are used to understand how visitors interact with the website. These cookies help provide information on metrics the number of visitors, bounce rate, traffic source, etc.
Advertisement
Advertisement cookies are used to provide visitors with relevant ads and marketing campaigns. These cookies track visitors across websites and collect information to provide customized ads.
Others
Other uncategorized cookies are those that are being analyzed and have not been classified into a category as yet.
SAVE & ACCEPT